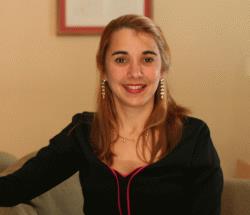 Spanish professor   Bachelor's Degree in Education with majors in Spanish, Spanish Literature, Latin American Studies and Teaching Methodology. I am a native Spanish speaker who for the last 16 years has been teaching Torontonians the simplicity of mastering Spanish. Experience in:   1. Tutoring:  - University students,  - Corporate: Business Spanish courses, on or off your premises,  - Adults and children,  - Travelers: Enhance the Spanish/Latin culture experience. 2. Translation and Interpretation.

Teaching Spanish and Literature to grades ten through twelve.

Designed and taught programs for students to prepare them for government entry exams for university.

I only commute for more than three students. I teach close to the intersection The Queensway and Islington. Etobicoke.

Verified
She is an excellent teacher!

Erelyn has an gift/experience for teaching spanish. I am already an intermediate/advanced student, learned something from every class, plus had a lot of fun doing it!

Erelys has been teaching our 6 year old daughter for over two years now and it is impressive to see how fluent she is already. The lessons include reading and writing which have also helped in providing our daughter with better writing skills overall. Erelys is extremely patient and knows exactly how to customize her classes based on progress. I would highly recommend her for anyone who is looking into seriously learning Spanish.

Verified
A great experience for my daughter.

Very professional, very helpful and caring and my daughter enjoyed her tutoring lessons more than her classroom lessons. Thank you

Erelyn is a highly qualified teacher, and it shows. She quickly ascertained my level and learning style, and tailored the classes to meet my needs very effectively. She is patient, creative, and lots of fun to work with. She also develops her own materials so you get personalized instruction and interesting content. Excellent value and quality!

I took lessons with Erelys to improve my Spanish for a planned cycling trip to Spain. She was very knowledgeable, professional and helpful. She prepared lessons that specifically targeted the language areas I would be needing. In only seven lessons I went from having little comfort with the language to feeling I can handle most common situations I will face on the trip. I highly recommend Erelys.

Verified
The best teacher/tutor I've ever had

Erelys is a fantastic teacher in so many ways. She was always incredibly warm and friendly during every lesson, and did a wonderful job of creating and crafting them to fit my level and interest. She will not only help build your confidence with the language, but she will also teach you about Spanish culture and tie it into her lessons. I learned so much more than I thought I would, and my Spanish improved greatly through her tutoring. She is an amazing teacher and I would recommend her to anyone.

Erelys was an amazing teacher who was always prepared. She came to class with enthusiasm, knowledge, fun and shared stories and lessons not only about the language, but the Latin culture too. After a couple years of consistent lessons, I feel that Erelys prepared me for comfortable travel and easy communication with locals in various countries. I can not praise her enough, and highly recommend her to anyone, in any stage of life, who wants to learn Spanish!

Erelys taught spanish to my 8 year old daughter. The teaching environment she provided was very welcoming and safe. Her structured lessons were very effective but included a variety of teaching materials (e.g. fun games, songs, spanish dictionnary) and methods (e.g. conversations, role play). I would highly recommend Erelys as a spanish teacher.

Erelys is an incredible Spanish instructor. She immediately learns your level and adapts your lessons accordingly to your level. I have learned an incredible amount of Spanish through her teaching style. I highly recommend.

Verified
Best of the best

Erelys is a fantastic teacher and I can’t recommend her highly enough. She is patient and encouraging. She never rushes me or finishes sentences for me unless it is clear I need help. She always comes to class prepared with a lesson plan tailored to my needs and my level. She is spirited and always tries to make the class as enjoyable as possible. On top of being an excellent teacher Erelys is a lovely person to have the pleasure of knowing. Thank you Erelys for all your help!

Erelys brings a fantastic mix of formal and more personal informal spanish to her lessons. She will teach you what you need to know, while building your confidence. I highly recommend her to anyone at any level. Not to mention if you're a Cuba super fan like I am then Erelys is the perfect match for you; friends and family...Buena Suerta..

Erelys is very professional teacher with a very good and helpful system of tutoring. She also gives very important information about the culture and traditions of Cuba and other Latin countries. Erelys has the high level of tutoring skills as well as communication. She is very pleasant and welcomed person. I spent very good time and got Spanish fast. Thank you Erelys.

Verified
Excellent exactly what i needed

Erelys, is excellent spanish teacher and was exactly the kind of teacher i needed i was very lucky to have met her. she was very organized for each lesson. She is very professional and has the correct back ground from an educational standpoint to teach, which is very important (a lot of people out there teach spanish because they speak spanish) but she has the educational back ground to really teach and explain things properly. She is very patient, and she cares very much about each student and you can tell from the way she interacts with you. I would definately recommend her to anyone i know that wanted to learn spanish.

Erelys is an AMAZING tutor. She taught me so much. I first started going to her for help in Spanish for my college course. After completing my course and getting a A ! I decided to take classes to further excel in Spanish! She plans all her classes in advance and to your skill level ! She’s very encouraging and wants you to excel in this beautiful language ! It’s been a great learning experience and I’m so glad I had her !

Erelys provided very effective instruction and was flexible in tailoring the course to my objectives and time frame .

Highly Recommended Tutor: I needed some preparation for a business trip to Argentina. Working with Erelys was excellent. She quickly understood how to build on my beginners level and focused on filling in the gaps that prepared me for formal business introductions along with a few cultural tips. Once we got the basics down we worked on getting by at restaurants and shops during the evenings. It made the trip both more productive as well as entertaining. Highly recommended, I think its her bachelors in Spanish and education that makes the difference.

Verified
Best Spanish teacher I had

Erelys is best spanish teacher i had. She comes prepared for every lesson and make adjustments accordingly. She adjust every lesson as necessary. I highly recommend her, you will see progress very quickly